Lecture: "Failure Is Not An Option" 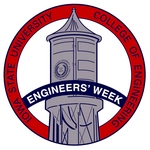 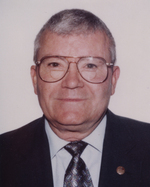 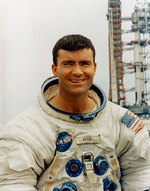 Astronaut Fred Haise served as the lunar module pilot during the ill-fated 1970 Apollo 13 space mission. He survived another harrowing ordeal in 1973, following an aircraft crash during filming of the Pearl Harbor epic, Tora! Tora! Tora! Haise went on to become one of the first astronauts to pilot the space shuttle in test missions. He will use NASA footage of the Apollo 13 flight during his presentation.

Fred Wallace Haise Jr. was a member of the ill-fated Apollo 13 moon flight, and a space shuttle test pilot. His only flight into space was on Apollo 13 (April 11-17, 1970). Haise and mission commander James A. Lovell, Jr., were to have separated the lunar landing module Aquarius from the command module Odyssey, piloted by astronaut Jack Swigert; they would have landed near Fra Mauro, a hilly region on the moon. Fifty-five hours into the mission, an oxygen tank in the service module behind the command capsule exploded. Quick thinking by the crew enabled them to power down the capsule and power up the lunar module, turning the latter into a cold but functional lifeboat. After 86 hours and one quick swing by the moon, the astronauts were able to power up the capsule systems and made a safe return to the earth.

The cancellation of Apollo flights 18 through 20 due to congressional budget cuts removed any further chance of a return to the moon for Haise. He instead turned his efforts toward the space shuttle, serving as technical assistant to the manager of the space shuttle orbiter project. Later, he piloted three of the atmospheric glide tests of the orbiter Enterprise (flights 1, 3, and 5, June to October, 1977). In March 1978 Haise was assigned to command the third orbital flight of the shuttle on a rescue mission to Skylab, but the ailing space station reentered the atmosphere and burned before the much-delayed shuttle flight could be made.

Haise was born in 1933 in Biloxi, Mississippi. He graduated from Mississippi Gulf Coast Junior College before becoming a naval aviation cadet in 1952. After flight training he became a flight instructor at the United States Navy's advanced training command at Kingsville Naval Air Station, Texas. From 1954 to 1956 he served as a U.S. Marine Corps fighter pilot. In 1957 he enrolled at the University of Oklahoma, graduating in 1959 with a D.Sc. degree in aerospace engineering. From 1957 to 1959, while still at college, he served as a fighter pilot in the Oklahoma Air National Guard. Later in 1959 he returned to flying as a research pilot for NASA's Lewis Research Center in Cleveland, Ohio, and served as a U.S. Air Force pilot with the rank of captain from 1961 to 1962. In 1963 he became a NASA civilian pilot at Edwards Air Force Base in California and three years later was chosen as an astronaut.