Your Entire Campus Should Be a Free Speech Zone 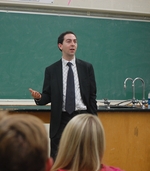 "Your Entire Campus Should Be a Free Speech Zone," Adam Kissel, vice president of programs for the Foundation for Individual Rights in Education. FIRE works to defend and sustain individual rights at America's colleges and universities, including the freedom of speech, religious liberty and the sanctity of conscience. Part of the First Amendment Day Celebration.

Before joining FIRE, Kissel was director of the Lehrman American Studies Center and the Jack Miller Center for the Teaching of America's Founding Principles. With Sharon Browne he wrote a Faculty Rights Handbook in 2007. In 2009, he won a First Prize in education reporting from the National Education Writers Association. Kissel is a graduate of Harvard University and earned a master's degree from the Committee on Social Thought at the University of Chicago.