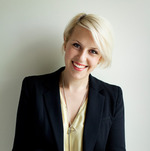 Daisy Ginsberg studied architecture at Cambridge University, design at Harvard University, and earned an MA in design interactions at the Royal College of Art.

As Design Fellow on Synthetic Aesthetics, an NSF/EPSRC-funded project at Stanford University and the University of Edinburgh, Daisy Ginsberg has been curating an international program researching synthetic biology, art and design, investigating how we might "design nature." She is coauthor of the forthcoming book Synthetic Aesthetics.

Through intensive research into synthetic biology, Ginsberg is exploring potential roles for design in a "Biotech Revolution." Her work includes:

Seasons of the Void, which imagines fruits developed for procurement during extended space travel. They would be grown from redesigned yeast requiring electricity, not sunlight, to grow.
The Synthetic Kingdom, a proposal for a new branch of the Tree of Life;
E. chromi, a collaboration with James King and Cambridge University's grand-prize-winning team at the 2009 International Genetically Engineered Machine competition (iGEM); and
The Well-Oiled Machine, a science fiction short story, co-written in 2009 with Oron Catts while a resident at SymbioticA, the art and science laboratory at the University of Western Australia.

She taught both the ArtsScienceBangalore and Cambridge University iGEM teams in 2010. In 2011, she designed "Synthesis," a one-week intensive synthetic biology lab workshop for artists, designers, scientists and others. The workshop was a collaboration with The Arts Catalyst, UCL, SymbioticA, and Synthetic Aesthetics and was funded by The Wellcome Trust. Most recently, she guest-edited the December 2012 issue of the scientific journal Current Opinion in Chemical Biology.

Daisy Ginsberg's work has been exhibited at MoMA NY, The Art Institute of Chicago, The Wellcome Trust, London's Design Museum, the Israel Museum and the National Museum of China. In 2011 her work was nominated for the Brit Insurance "Designs of The Year" and the Index Award, and she won the World Technology Award (Design). In 2012, she received the first London Design Medal for Emerging Talent.