Engaging Conservatives on Energy and Climate 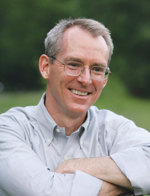 Bob Inglis, a six-term Republican congressman from one of South Carolina's most conservative districts, established the Energy and Enterprise Initiative. National Affairs Series

During a 2010 campaign event, South Carolina congressman Bob Inglis told the audience he believed in human-caused climate change. The fallout from that comment helped ensure his defeat. After leaving Congress, Inglis established the Energy and Enterprise Initiative at George Mason University. The organization has taken on a mission to convince American conservatives that climate change is real and that free enterprise principles hold the keys for dealing with it. He favors removing all fuel subsidies - from solar and wind to fossil fuels - and imposing a carbon tax as the fairest way to make polluters pay for the greenhouse gas emissions they cause.