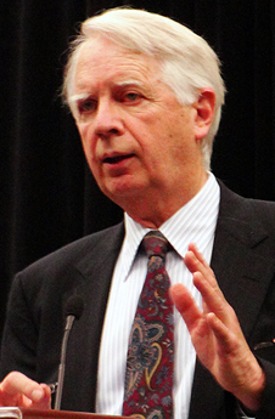 Tom Twetten served 34 years in clandestine services for the Central Intelligence Agency. He is a graduate of Iowa State ('57 psychology). World Affairs Series

Twetten worked under diplomatic cover in such locations as Libya, Ghana, India and Jordan, and was chief of the CIA's Near East and South Asia Division during the Soviet war in Afghanistan. He served nearly six years as the CIA's Deputy Director for Operations, commanding the agency's worldwide clandestine network. During this time he directed intelligence resources in support of new democracies in Eastern Europe, supported a coalition of allied forces in the Gulf War following Saddam Hussein's invasion of Kuwait, and placed new emphasis on fighting international narcotics trafficking, terrorism, and the proliferation of weapons of mass destruction. Twetten received a master's degree in international affairs from Columbia University and served as a lieutenant in the U.S. Army.