Film & Discussion: Who Speaks for Islam? 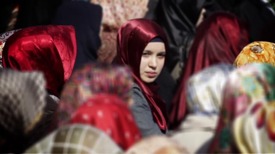 A panel discussion will follow a screening of the 55-minute documentary "Inside Islam: What a Billion Muslims Really Think."

The film Inside Islam: What a Billion Muslims Really Think explores how Muslims around the world really feel about issues of gender equality, terrorism, and democracy. It is based on the world's first major opinion poll, conducted by Gallup, which interviewed Muslims from Indonesia to South Asia, to the Middle East, as well as minority communities in the US and Europe.