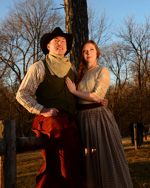 This landmark musical, the first by Rogers and Hammerstein, opened in 1943 and was immediately a box office smash; its popularity has not faded. The love story of cowboy Curley and farm girl Laurey was originally described by one New York critic as "a beautiful and delightful show that has, at a rough estimate, practically everything." Since its opening, Oklahoma! has been performed every day somewhere in the world for the past 74 years.