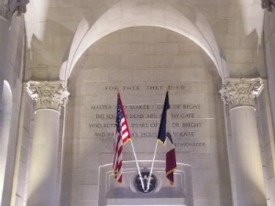 In recognition of the 100th anniversary of World War I, Douglas Biggs, a native of Ames and a graduate of Iowa State University, will discuss the impact of The Great War for Iowa State and its returning veterans.

Biggs's interest in Ames and ISU history has led to several publications and public lectures on such topics as the Dinky, the university during World War II, and the early years of the Iowa State College football team.