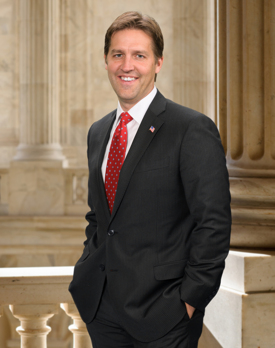 "If Not Us, Who? Human Dignity in the 21st Century." Senator Ben Sasse is a fifth-generation Nebraskan and is serving his first term in the U.S. Senate.

Ben Sasse was elected to the Senate in 2014 on a platform of restoring the Constitution to its rightful place and encouraging a more constructive and transparent politics. Much of his career has been spent guiding companies and institutions through times of crisis, including his five years as president of Midland University in his hometown of Fremont, Nebraska. Sasse earned a PhD in American history from Yale University. He is the author of two books, Them: Why We Hate Each Other and How to Heal, which will be released in early October, and The Vanishing American Adult: Our Coming-of-Age Crisis--and How to Rebuild a Culture of Self-Reliance.