Lecture: The Role of the U.S. in the Global Food and Agriculture Marketplace 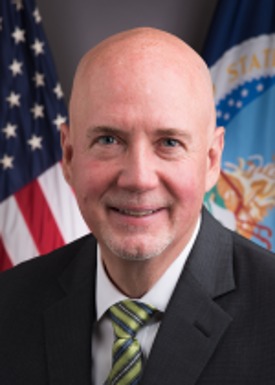 Ken Isley heads the U.S. Department of Agriculture Foreign Agricultural Service, where he leads offices around the world in expanding trade and export opportunities for American agriculture. Carl and Marjory Hertz Lecture on Emerging Issues in Agriculture.

Isley also chairs USDA's Intra-Departmental Coordination Committee on International Affairs. Previously, Isley worked for Dow AgroSciences, where he held various senior leadership roles, including vice president, general counsel, and head of the company's global legal department. Most recently he was special adviser for Corteva Agriscience. Isley holds a BS degree from the Iowa State University and a JD from the University of Iowa. He grew up on his family's farm in Iowa and continues to own and manage grain and livestock operations.