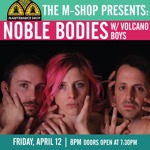 Noble Bodies is Bryce Taylor (guitar/vox/drums), Elaine Bradley (drums/vox/guitar), and Chris Bennett (bass). Together, they started the band 'Another Statistic' in the fall of 2004, but then broke up in January of 2008 due to irreconcilable differences. In April of 2017, Noble Bodies was officially born. They band is currently recording new material and released another single, "Take Me Down," in May 2018. They hope to have the album ready some