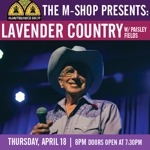 In 1973, Patrick Haggerty recorded and released Lavender Country, a collection of gay radical country music. Since 2014, Patrick has played shows all over the states, from New York to San Francisco and everywhere in between, spreading his revolutionary message of love and acceptance in the face of violence, hate, and fascism.