Lecture: "U.S. Leadership in the Global Fight Against Slavery" 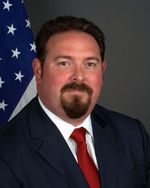 Ambassador (and ISU alum) Luis CdeBaca has worked under three presidential administrations to combat human trafficking and modern-day forms of slavery. He was recently appointed by President Obama to direct the Office to Monitor and Combat Trafficking in Persons at the Department of State, which is dedicated to pressuring foreign governments to free persons forced to work, under threat of violence, for no pay beyond subsistence.

At the Justice Department, CdeBaca was one of the country's most-decorated federal prosecutors. He was honored with the Attorney General's Distinguished Service Award for his service as lead trial counsel in the largest slavery prosecution in U.S. history - United States v. Kil Soo Lee - which involved the enslavement of over 300 Vietnamese and Chinese workers in a garment factory in American Samoa. CdeBaca received the Director's Award from the Executive Office of United States Attorneys for his work on the New York "Deaf Mexican" trinket peddling slavery case, and was awarded the Department's highest litigation honor - the Attorney General's John Marshall Award - for his work as lead counsel in a path-breaking prostitution slavery case in Florida, United States v. Cadena. He has received the leading honor given by the national trafficking victim service provider community, the Freedom Network's Paul & Sheila Wellstone Award, and has been named the Michigan Law School's Distinguished Latino Alumnus.

He served as Chief Counsel of the Civil Rights Division's Human Trafficking Prosecution Unit under the Bush Administration, and during the Clinton Administration, was the Justice Department's Involuntary Servitude and Slavery Coordinator. He was instrumental in developing the United States' victim-centered approach to combating modern slavery. He has investigated and prosecuted servitude cases in which victims were held for prostitution and other forms of sexual exploitation, farm labor, domestic service, and factory work. He has convicted dozens of abusive pimps and employers, and helped to liberate hundreds of victims from servitude.

Born in New Mexico, CdeBaca was raised on a farm in Huxley, Iowa, and attended Iowa State University. He received his law degree from the Michigan Law School, where he was an editor of the Michigan Law Review.