All I Could Be: My Story as a Woman Warrior in Iraq 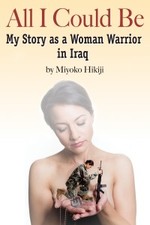 Miyoko Hikiji is the author of All I Could Be: My Story as a Woman Warrior in Iraq.. It's an account of her 400 days deployed for Operation Iraqi Freedom during the onset of the Global War on Terrorism and exposes the comradeship, intimacy, cowardice and humor of soldiers living in physical and emotional grit. It also pays tribute to the two soldiers in her unit that lost their lives.

More information about the speaker
Miyoko Hikiji served as an enlisted soldier in the Army and Iowa Army National Guard for nearly a decade, spending 400 days deployed for Operation Iraqi Freedom in 2003-2004. Her job duties included truck driver, unit correspondent and administrative sergeant. During the deployment she spent over 70 days running supply convoy, security and raid missions throughout the northwest quadrant of Iraq. Simultaneously, Miyoko wrote a company newsletter, contributed to her support squadron's newsletter, wrote articles for a hometown newspaper and updates for the unit's family support group in Iowa. Upon her return from Iraq, Miyoko wrote her company's deployment history for the archives at the Gold Star Museum on Camp Dodge - the Iowa Army and Air National Guard State Headquarters.

Miyoko earned her degree in journalism from Iowa State University in 2004. She is represented by Peak Modeling Agency and has been featured in print advertising and commercials, regionally and internationally. Miyoko, her husband Tom, and two daughters reside in Iowa.
Loading...