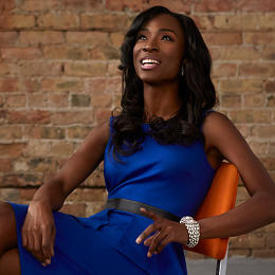 Angelica Ross is the founder of TransTech Social Enterprises, a company that empowers trans and gender-nonconforming people through on-the-job training in leadership and workplace skills.

A leader in the movement for trans and racial equality, She has toured nationally, speaking her powerful mission into action with business leaders, educators and the President of the United States. Since studying theater at Florida Atlantic University, Angelica Ross has been featured in film, television, and live theatre. She is the breakout star of the upcoming series Her Story, which explores the lives and loves of two transwomen in LA.