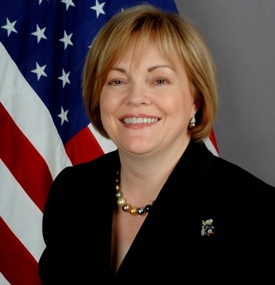 "America and the Middle East: Shifting Sands in the Security Relationship?"- Ambassador Deborah K. Jones, a career member of the Senior Foreign Service, recently stepped down as the U.S. Ambassador to Libya, a position she held May 2013 through 2015. World Affairs Series

Deborah Jones also served as U.S. Ambassador to the State of Kuwait from 2008 to 2011 and as Principal Officer at the U.S. Consulate General in Istanbul, Turkey from 2005 to 2007. Additional overseas assignments include posts in Iraq, Tunisia, Syria, Ethiopia and the United Arab Emirates. Ambassador Jones has also served as Senior Faculty Advisor for National Security Affairs at the U.S. Naval War College and prior to her post in Libya was Scholar-in-Residence at the Middle East Institute.