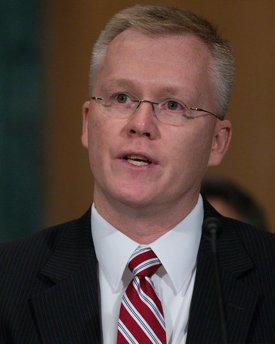 Michael Piwowar was appointed to the U.S. Securities and Exchange Commission (SEC) in 2013 and currently serves as Acting Chairman of the Commission. He was the Republican chief economist for the U.S. Senate Committee on Banking, Housing, and Urban Affairs and the lead Republican economist on the four SEC-related titles of the Dodd-Frank Act and the JOBS Act. Part of the Stafford lecture series on banking.

Before joining the White House, Michael Piwowar worked as a Principal at the Securities Litigation and Consulting Group (SLCG). At SLCG, he provided economic consulting to law firms involved in complex securities litigation and technical assistance on market structure, regulatory policy, and risk management issues to domestic and international securities regulators and market participants. His first tenure at the SEC was in the Office of Economic Analysis (now called the Division of Economic and Risk Analysis) as a visiting academic scholar on leave from Iowa State. In those roles, he provided economic analyses and other technical support to the Commission and other SEC Divisions and Offices on a wide range of rulemaking, compliance, and enforcement matters.