The Symbolism of the Sand Mandala 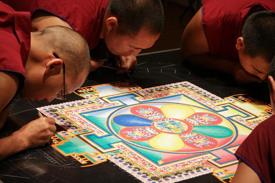 Monks from the the Drepung Loseling Monastery will create a mandala sand painting in the lobby of the Memorial Union. The process consists of opening ceremony with chants, music and mantra recitation and ends with the dismantling of the mandala and dispersal of the sand.

Millions of grains of sand are poured from traditional metal funnels called chakpur to create a finished mandala approximately five feet by five feet in size. Formed of a traditional prescribed iconography that includes geometric shapes and ancient spiritual symbols, the sand-painted mandala is used as a tool for re-consecrating the earth and its inhabitants.