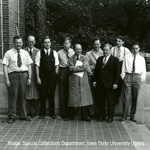 Learn how a small group of scientists from Ames played a critical roll in The Manhattan Project.

Speaker: Kathy Svec, daughter of a Project researcher
The desperate, top-secret race during World War II for the allies to master the military application of nuclear fission before Nazi Germany played out in 32 sites across the U.S. and Canada. The story of how Ames became one of these sites will be told by the speaker, whose father, Harry J. Svec, was pulled into the research while a graduate student in Chemistry at Iowa State. The role that small group of scientists played was critical to the timing and success of the Project.