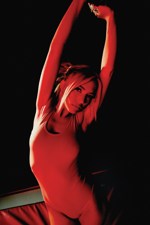 Indie pop artist and actress Lennon Stella will perform a free 'virtual' concert and chat with Iowa State University students. The event is free, but students must register online with an ISU email address to receive a link to the virtual event the night of the show.

Register
Register for the free show at www.sub.iastate.edu with an ISU email address to receive a link to the virtual event.

About Lennon Stella
Ontario-born and Nashville-based singer, songwriter, actress, and multi-instrumentalist Lennon Stella has been streamed nearly half-a-billion times within a year and is pegged among Refinery29's "Young Celebrities to Watch in 2019" and Teen Vogue's "16 Musicians You Need to Be Listening to in 2019" and most recently Amazon Music's "Artist to Watch for 2020."

Stella starred in the ABC/CMT hit TV show Nashville as Maddie Conrad for six years. In 2018, she lent her voice to Jonas Blue's "Polaroid" with Liam Payne, which has 200-million total streams and counting. Kickstarting her solo career, the songstress introduced a singular style on the 2018 Love, Me EP. It bowed in the Top 5 of Billboard's "Heatseekers Albums Chart" as the single "La Di Da" amassed more than 90-million Spotify streams and counting. After selling out dates on her first North American headline tour, she shared the stage with Anne-Marie and recently supported The Chainsmokers and 5 Seconds of Summer.

Stella additionally lent her voice to "Takeaway" by The Chainsmokers and Illenium, which exploded as a phenomenon with 100-million Spotify streams and 37-million views in under eight weeks. Most recently Stella released "Summer Feelings" featuring Charlie Puth as part of the soundtrack for the 2020 feature film Scoob!. She released her debut album, Three. Two. One. this past April.